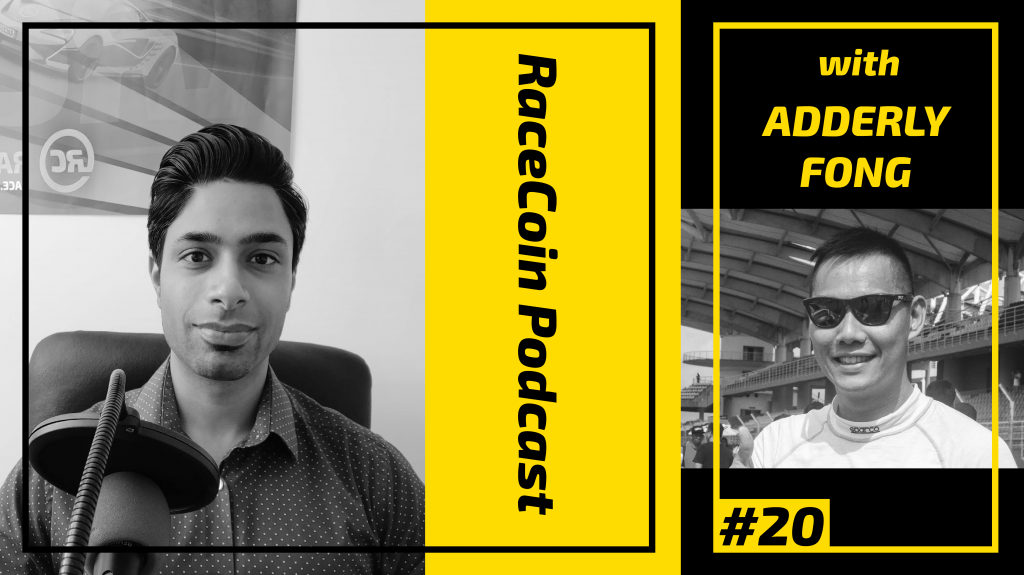 Q1 – What has it been like being a racing driver in Hong Kong, what sort of opportunities is out there?

Adderly Fong started when it was quite a new sport which wasn’t well known. Race Driving has its differences and can be difficult. The internet (Social Media Platforms) wasn’t popular at that time when Adderly started out as a Race Driver. The first racing pictures Adderly Fong put on his Instagram Account were a couple of years in his racing career which was good in a sense.

Q2 – How has the attraction been back then comparing to now when you are still using social media?

You get to reach out to a lot more people but mostly in China. China has a different type of social media – its apps. I can use both social media (Instagram, Facebook) and other programs for the Chinese media.

Q3 – What sort of Pros and Cons are there for both platforms in terms of exposure? Do you get more of one compared to the other? Is it a little bit different in terms of the number of people that you can reach as well? What sort of variance is there in terms of that as well? Do you feel like other people who may be looking for racing opportunities in that region should also be using these platforms?

It’s an effective way to reach a lot of people and in China more specifically. Last 3 to 4 years I’ve seen a lot of fan following. I have done a lot of racing in Asia which also helps to boost my fan following. In China your whole life is based around the cell phone; one app takes care of social media stuff. You can do basically anything on 1 and 2 of these apps. Older generations use the mobile phone while being a lot more involved – in the USA.

Q4 – In some senses, less competition – is that true to say?

Yes, because of the new market European and American talent participating in these different championships. Asia’s got a lot of tracks and also China. At the moment China has over 300 Applications for race tracks all around the country. Newly establish venues will allow new races and open up new markets.

Q5 – In Hong Kong, if I was a racer who wanted to get into racing, what sort of opportunities are there now and how would I go about it?

There’ no definite answer to that question. Every motorsports driver starts from a different place and meets different people along the way. You have to treat everyone good because you never know who may help you along the way. When I started racing in Asia at age 16, nobody knew who I was. But I build up my name there for 2 years and then building up my craft in Europe. It’s all about building up old relationships because I met these persons again which gave me a lot of opportunities. You have to have a respectful approach towards persons along your racing journey which can lead to more opportunities. The Cons of being in Hong Kong is that if you go to a meeting in Beijing or Shanghai, they classify you as a person from a different country. They could sponsor us because we’re Chinese also but on the opposite side, we’re from Hong Kong.

Q6 – How do you get over that, what do you do and say to them to still kind of fight your case? Is there a way to win that obstruction that they’re trying to throw at you?

Q7 – What is their primary reason for keeping it so exclusive in some sense?

I think it’s more of a tradition thing. People don’t understand the outreach that this sport can connect to. Racing in China is quite a new concept. In such a huge population it’s still a very small percentage.

Q8 – How did you find the Zun Motor Sport Crew, how did you get involved with them?

It was the beginning of last year; I’m a friend with most of the Hong Kong race drivers. If we have any opportunities we tend to pass these responsibilities elsewhere to other drivers. In China, there’s a race called CTCC (China Touring Car Championship). I got involve with this crew through another Hong Kong Driver. He had competed in this championship. I was one of only 2 who has never been in this championship.

Q9 – You did a 700 Kilometer race – what was that like and how did you get into that? Talk us through some of the stages of it?

When I started racing in 2015, through that racing we pick up a lot of experience. We learn how to put on seat belts, change drivers quickly, etc. We have something called the Pit Stop Time, which allows the driver to refill the car, change the driver, change tires in a safe but also a quick time without rushing. All these things were quite a different experience for me.

Q10 – So you are teaching them a lot more than what they’re teaching you in that sense?

We’re helping them to build as a new team and also helping to teach them safety principles.

Q11 – A race that long, what kind of experiences in term of when you initially start? Are you a lot like in the zone, excited? What goes through your head 300 kilometers compared to the end?

Q12 – What kind of things do you do to build up that concentration and to be able to focus on driving so long?

Motorsport is like any other sport- the more you do it, the more you practice the closer to perfect your driving skill becomes.

Q13 – How do you secure some of these things and getting an opportunity in Europe?

I first started at age 16 at a race against time. Kids in Europe start at age 3-6. By the time they reach age 16, they have 10 years of racing experience. At age 16-18 there was learn as quickly as you can in Asia and then see if you can go and race in Europe and do schooling at the same time. I was going to University, so I stay and race in the UK. On a budget, I still had the support of my father. The 3rd year I ever race my results weren’t great so finding sponsorship was very difficult. We found a really cheap car and got an engine lease and then open a private company. We try to run a race team, getting few of the guys to race in Germany. After that opportunities came. I met people in Hong Kong which wanted to support me in my pursuit in formula one. I met a manager in Italy who was looking for a 3rd driver. I took the opportunity and find the right people.

Q14 – Where do you now place your dreams and where do you hope to compete more and see yourself in the next 5 years or so?

When Adderly was doing formula stuff, it’s taken him into the US. Formula 1 is where he wants to continue. The ultimate goal for Adderly Fong is never growing 24 hours, to be able to win that race.

Q15 – Where has your sense of direction come from- have you have a mentor through all of this? How did you make these decisions? I’ve gotten these opportunities; I’m going to take it. How did you navigate through this path that is clearly not a straight forward one?

Adderly Fong received lots of advice from family and friends. It’s up to you to take yourself where you want to go. It wasn’t a really happy environment for him because it was competitive.

Q16 – What advice do you have for people who are looking for sponsors, especially those starting out maybe in Hong Kong?

Build up your connections and try to meet more new people. Down the line, you might meet a sponsor or race, team owner. You might use this connection later on to set a business deal for them. You can get a sponsorship and use this to raise funds for new gear, cars to go racing. You have to do your research and also ask questions.

The biggest lesson is to never give up. When Adderly Fong first started he was crashing every weekend. A lot of times he would question his ability and even ask himself if it’s worth continuing. If you don’t crash you don’t know where the limit is, so push hard and when you find the limit, try to not make the same mistake twice. Apply that to life which has helped him out in racing.

Q18 – What experiences allowed you to have this mindset in the first place?

Adderly Fong’s parents gave him a lot of freedom when he was growing up. Adderly had the chance to try a lot of things. They have been given the mindset, Try first you never know what you’re going to find. Adderly Fong had a mental coach that had to help him to build up confidence, self-esteem. She even taught him visualization.