#18: Xavier Maassen describes his journey of consciousness and self discovery 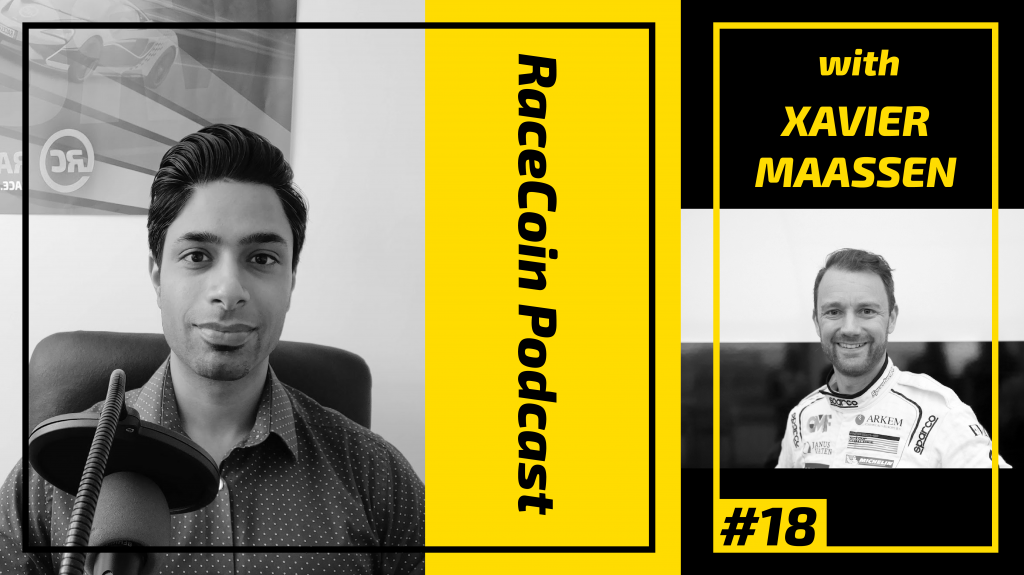 Q1 – Tell us about your journey into motorsport?

Xavier Maassen started when he was 15, for 3 years in karting and then after that, he went to Formula Ford. Xavier went to Silverstone to train just before that, and this was really helpful for the basics of racing. There on, went onto Formula Ford. The Winter series was where we started off and did 4 races in England.

Q2 – How did you get those opportunities and what are the main differences between karting and cars?

Q3 – How did you shake off the nerves you had from first dealing with sponsors to now?

You get used to it. The first time is always the hardest. It’s still thrilling but it’s cool. Finding the main sponsors.

Q4 What is a good deal with a sponsor?

Lots of money. The bigger the deal, the better it is. A driver needs to get value for the sponsor. Relationship marketing is a big deal with sponsors. Showing VIP’s is a part of it. It’s a cost for catering and other things but it’s about how can you get it done. The value you create has to be higher.

Q5 – Did you bring on the sponsors through your dad or was it a personal effort?

In the beginning, it was for sure as Xavier Maassen was still studying in International relations. It was a backup plan and sports sponsorship was my thesis. Xavier’s uncle, his dad’s relations, his dad’s sponsorship’s as well. At the start, it was 70:30 between him and Xavier Maassen. But after he graduated, he took it all in fully.

Q6 – You’ve become a consciousness coach and a trainer as well – how did you get started?

As a race driver, you want to be better than others. Physically and mentally. One of the owners of the gym where Xavier Maassen worked out, he came back from Africa after a 4-day course, he inspired him to do it too. Then he realized what he wanted from life. He was so enthusiastic that he started it up in the Netherlands – and Xavier wanted to make myself better at it. Xavier Maassen then ended up doing all the training, learned a lot about myself as a driver and person. Then did the training program, and qualified. He wants to do what he does properly. Xavier was really just interested in the self-development of the program. Then he realized, he wanted to help others achieve their dreams and got more involved. So now that Xavier Maassen is accredited, it’s amazing. Mixing consciousness and what Xavier has learned from racing. He combines those as a keynote speaker. It’s about the background of how he got there, the choices where Xavier had fears in my life if he was going to make it. Stuff that people want to listen to. The motorsport makes the stories he shares more interesting.

Q7 – When did you first realize you wanted to be a trainer?

When Xavier Maassen started, it was just about doing it for myself. And over time, he realized it would be great to help others feel what he feel too.

Q8 – The irony of delusion is that you don’t believe you have blinders on and that you are not deluded – so you think you are the best decisions you know-how. How do you get them to see the real truth when they don’t know that they can benefit from opening their eyes?

Yes, we all have blind spots. And it’s about the right questions — to dig deeper into what you know and look. What would you do without any fear?

Q9 – The same question can reveal new truths at different stages of life – so how do you get people to think they know the answer?

It’s a matter of digging as you said. Connecting to them, feeling what they are saying and not saying – you can go deeper with them and get results which they didn’t even expect.

When I was young, I had an older sister with a heart condition, they went to the hospital to see her – I was 8 when she finally passed away. What I learned from the situation when I went to school – I was with the neighbors, uncle and aunt, grandparents but unconsciously – my parents are choosing her over me. As an 8-year-old it wasn’t obvious that I was doing this and didn’t make sense to me. So what happens, you have 2 options, everything I do doesn’t matter so and be a rebel or be someone who tries to get attention, and proves you are worth the attention. This meant I did well in school, became a great racer.

So in the past when I lost, I was pissed off for 2 weeks, it wasn’t the race, it was an attack on myself for not being good enough.

Q11 – As you’ve learned these things – maybe your aims have changed?

This was a huge self-discovery, and becoming conscious. The lesson was, I know I’ve done everything in my power, I’m not going to be sick anymore for 2 weeks. As a sportsman, I want to win, but the development and training have helped me be a better person.

Q12 – What kind of stuff did you do when you were an asshole?

Not being out the house, being grumpy. Throughout the training, everyone has a core drama, I’m not good enough to be loved, I’m not worth it. For example, if I have a fight with my wife, I still feel I’m not worth it, but now I see it.

Q13 – How has your definition of success changed over time?

If I have that sponsor then I will be happy. This was something that really drove me before. Success is different. Being able to do what I love most is something I consider. The proportions of the races you win are only 13-15% of the time. Then you are successful in motorsport.

I was always trying to go for more and now I’m happy for what is.

Q14 – What sort of myth, as someone successful yourself, can you help to debunk about success?

I struggle with it, I want to possess a porch on my driveway. I believe in the power of aiming for a goal, go beyond what is possible for yourself. It’s finding a balance between always charging ahead while being happy with what is.

Q15 – There is an extension for the goal?

Simon Sinek’s video of finding you why was really helpful. My bigger why is ‘sharing my passion for motorsports’ with other people. And the other way is that I want to show people you can live your dreams.

Q16 – Was that why you transitioned to GT?

I wanted to set out for Formula 1 – but in 2007 I drove the World Series for Renault. When I saw the sponsorship you need, and knowing I wasn’t the top 20 in the world, so I loved the endurance race. In a sprint race, you have to switch off and just go, endurance is more analytical which matched my skill set more.

35 entrepreneurs came where I had the opportunity to teach them and they wanted to enjoy a day of driving porches’ and just being a child on the track. Some others who I coach that come to really get better as it’s not their first time, I try and help them be better, it’s about sharing that same passion. Surrounded by people who also share it, you’re at Silverstone, it’s just a great experience. I get paid, and they enjoy themselves, they go away with a big smile.

Q18 – What message would you like to leave others about how they can achieve their dreams?

I have a video of me doing a James Bond dive off the cliff. It’s about getting over the fears that don’t exist. And taking fear under your arm.