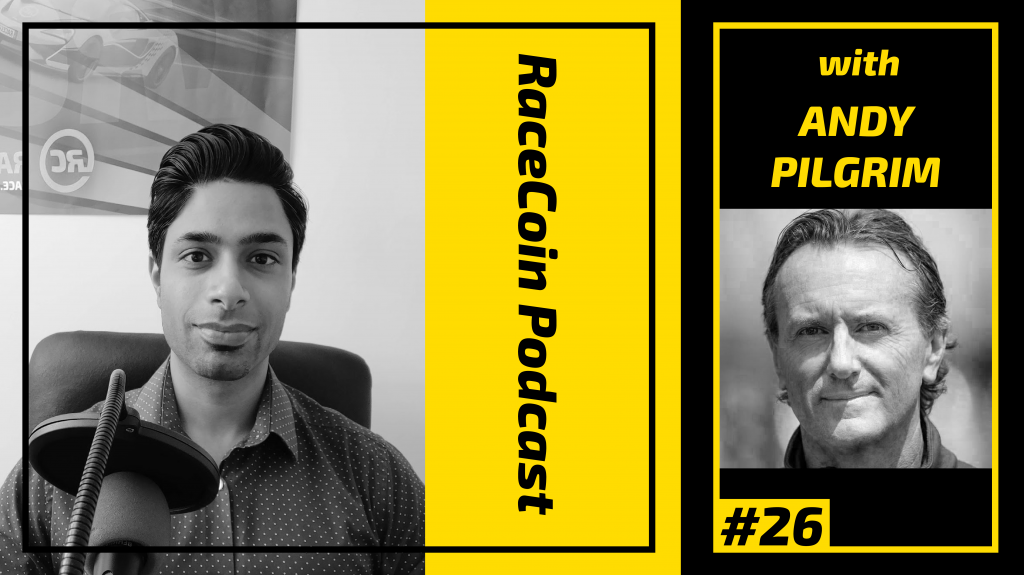 Q1 — When you first started you worked in IT to allow yourself to race. At what point did you realize that racing full time could become a reality?

Andy Pilgrim had an old Kawasaki 500 street bike, and while had income coming in from his day job, he simply decided he would start racing, Andy being someone who loved anything with an engine in it. He wanted to just start racing, but his current income dictated that he would be on two wheels, not four. Without a car, his mate would drop him off and pick him up from the track, the latter, he says, if he wasn’t in the hospital at the end of the day.

Q2 — When you mention being in the hospital, are you saying injuries were common back then?

Of course, he was being facetious in that statement, but Andy admits the sport was still actually quite dangerous when he started. The tracks were built for cars, so you had a much greater chance of getting hurt if you were on a bike.

Q3 — And you didn’t want to accrue a bit more money and wait to buy a 4-wheel. Why jump into the bike?

Financially, it seemed so out of reach to him, so he never even gave it a thought. He wanted to see right now if he was any good and didn’t care if it was a car or not. After quickly starting to win, he realized he actually was quite good. This led to his first job in the U.S. He comments that said job could have potentially saved his life, seeing how dangerous racing was to him back then.

Q4 — So, you went to America with about 106 dollars in your pocket. You mentioned that you were lean on food for the first few weeks. Can you explain that for us?

When he arrived in America, Andy Pilgrim was told he wouldn’t be getting his first paycheck for a few weeks, which meant he had about 100 dollars to live off of for nearly a month! He had to live with meager means to get by until his first payday.

Q5 — Is there any experience from those paltry times that you’d like to share with the audience?

Well, believe it or not, Americans looked at his English accent as if it was some sort of speech impediment. Because he was broke, he had to live between a home for battered women and an overflow for a mental institution, which was all he could afford. He’s actually quite carefree about the situation when commenting that it was quite entertaining, to say the least.

Q6 — What do you feel the differences are between your life back then compared to your successful life now in terms of happiness?

He says what he has now hasn’t affected his happiness at all. Andy’s generally a content person and doesn’t focus on the negatives in his life, just trying to take things as they go.

Q7 — And when did you actually get that break that enabled you to get these great opportunities?

In 1987, he had three-thousand dollars to his name, putting all that money into two race weekends with his team in an endurance race series. He was out of money by the end but was allowed to race for the rest of the season given his stellar performance. They ended up winning third in the championship and he received nine-thousand dollars in prize money, which he considers his first big break.

Q8 — To bet everything on one opportunity is incredibly tough, and for a lot of people it might not have worked out in their favor. Do you feel any gratitude for your success?

Of course, he feels incredibly fortunate for his victories and is especially grateful for being able to quit his well-paying IT job and start his own IT consulting business while managing to race full time.

Q9 — You’ve said that America creates a land of opportunity and if you’re willing to work hard and make the necessary sacrifices, you can go a long way. Is that something you still believe in?

It’s still true, Andy Pilgrim asserts, the land of opportunity he calls it. Never having even been in a race car until twenty-seven years old, he tells racers of all ages to never give up on their dreams.

Q10 — Is that what your foundation is about?

Andy Pilgrims ’s foundation is a traffic safety education foundation built as a giveback to the community and inspired by his mother and godmother who were big on helping people. It’s a non-profit organization where he gives everything away for free and these days it’s where you’ll find him spending most of his time.