#28: Kaz Grala – Breaking every single title as he races 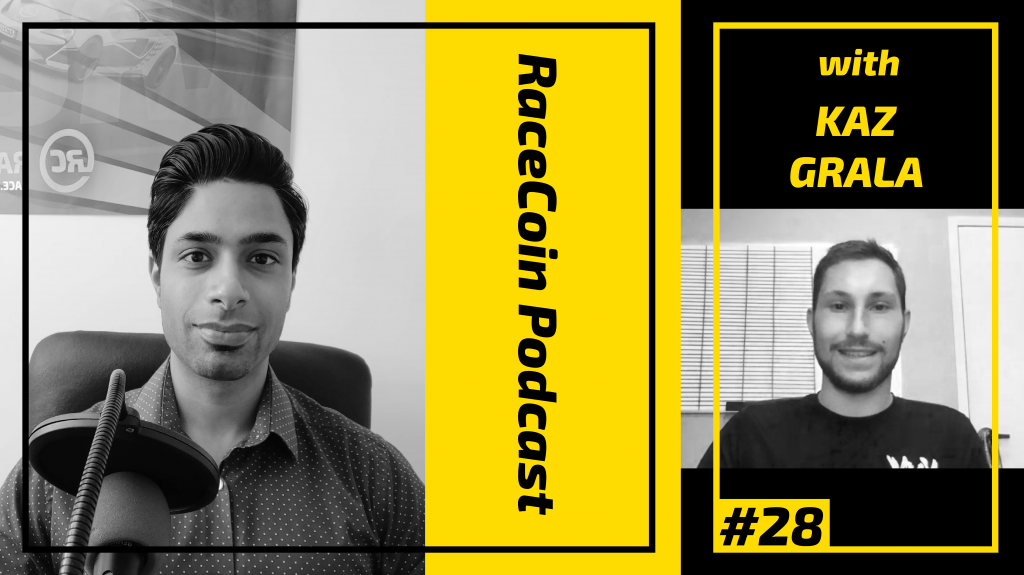 Q1 — You started racing at four years old and at an early age you were already winning championships. How did that affect your racing mentality as a child?

That’s the biggest reason he felt he should stick with it. By the time he was six years old, he had essentially tried every sport out there and racing was the one he seemed to excel at the most.

Q2 — What other sports did you participate in?

Swimming, tennis, baseball, soccer, you name it, he tried it. He tried to gauge where his passion was and what he enjoyed the most. The answer was racing.

Q3 — What was it about racing that you knew this was something you wanted to do for a living?

He loves that “being in the zone” feeling from racing. Away from outside distractions, it’s the epitome of peace for him. Of course, being at a higher level of racing now there are more distractions, even in the car, but even today it’s still incredibly calming.

Q4 — It’s that “zone” that people talk about in sports. That perfect balance between doing something and yet feeling like you’re not doing something. Is that what you’re referring to?

It’s in every sport. An athlete who is great at what they do gets into that zone. For Kaz personally, no other sport could give him that experience.

Q5 — Talk to me about your dad’s journey to America. Did that have any effect on your aspirations as well?

His dad emigrated from Poland with his family when Kaz was 8 years old and weirdly enough it was because he wanted to buy a car! Kaz explains his dad grew up always wanting to race and it was he who passed the torch down to his son.

Q6 — You’ve been the youngest person ever to compete in countless racing events. How did this affect your mindset towards the sport? Did this make you want to be first in more things? Did you set out to do this?

Kaz Grala wasn’t aware that he would be the youngest person to compete or win in these events at the time. It’s not something he chased, but a cool bonus. Racing fundamentally keeps you humble, he admits. For all the highs, there are certainly the lows to match them.

Q7 — And how do you manage the pressure of the extreme highs and extreme lows?

The best thing to do is to just take it one week at a time. You’re always fighting to be able to just stay in the game, so all you can do is just keep your nose to the grindstone and focus.

Q8 — How do you train yourself to be able to do that so successfully?

Racing his whole life, Kaz Grala doesn’t know any other way to handle that level of pressure and focus. It’s been intimately woven into who he is. He admits if he had gotten into racing later in life, he definitely would’ve had some struggles with the intense focus needed to be successful.

Q9 — It seems like doing what you love can feed the energy you need to avoid the mentally draining aspects of the sport. What are your thoughts on that?

It’s definitely what gets him through the harder parts. Maintaining a proper balance between professional and personal life, however, is one thing that helps in addition to his passionate energy.

Q10 — In your time off, you’ve managed to create a competitive NASCAR team in just under two weeks. What was that like?

It just so happened that a contract wound up being broken and Kaz was offered three racecars for compensation. Kaz Grala wanted to take advantage of the situation, so he rounded up some other racers to start a team and before he knew it, they placed in the top 10 of their debut race.

Q11 — How has that process of managing relationships and the behind the scenes team operations differed from just being solely a driver?

Although it does take away time dedicated to driving, Kaz feels it’s made him a more well-rounded driver for the better.

Q12 — What sort of specific impacts has that had on the way you drive?

It helps him appreciate even more the organizations he’s with, but once that helmet goes on, nothing’s changed.

Q13 — You were sponsored by a spicy ice cream company. How did that come about?

It was a fan who told Kaz about this ice cream company whose owner was a huge racing fan. They forwarded him his info and from there they ended up as a sponsor.

Q14 — And what exactly does spicy ice cream taste like?

It’s quite sweet, just with a spicy kick to it. It’s good!

Q15 — What would you now like to do with the level of fame and excellence that you’ve worked for?

Driving is still his passion and he has no plans other than to focus on what he loves the most.